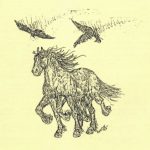 It’s only been a couple of months since we announced our determination to purchase land for the Asatru Free Assembly; the response from our readers has been very encouraging indeed. Right now we’re just over 20% of the way to our first goal of $5,ooo. It’s becoming quite clear that we’re going to succeed – the only question is when!

Of course, the $5,000 goal represents only the first hurdle. It should provide a minimal down payment on a hunk of unimproved land. After that we’ll have to struggle with monthly payments and with funds for roads, a hall, temple, shelters, power and other things we will have to add over the years. But we’re on the way thanks to you.

In related developments, we’ve located among our number an architectural draftsman who’s going to be bringing more of our concepts to life. (You’ll be seeing some of his material in future Runestones). Craftspeople of all sorts have generously donated pieces of their work for the auction at Althing Seven to benefit the Land Fund. Good things are happening!

Visions of just what we can do with this land, once acquired, continue to come in from people like yourselves. Some things, like shelters, temple sites, and meeting places are obvious. Others are less so. Some have suggested a store located off the premises that would sell goods produced by Asafolk. Others have proposed arrangements where selected outsiders could come to be introduced to our Gods. A place for training gothar, gythjur, and healers might be built. So could a youth camp – and of course a school. A library could be built to benefit all Asafolk, and a resource center might aid the production of books, pamphlets and audio and visual tapes. Certainly the opportunities for serving our Gods and our Folk will be many!

But all this lies in the future. It can begin happening in a year or two, if we all get behind it – or it can drag out for five years or more if the idea loses steam. We are off to a good start, but we need your help to make it. If you haven’t sent in a contribution, please consider doing so. This is the chance to take an active part in the ongoing history of a movement – a chance to give the Gods a place that they can be specially honored – a chance to serve our people. Let’s prove that Asafolk are doers, not just dreamers! If you send $15 or more, we will send you a carved reminder of our appreciation, bearing the special symbol of the project. 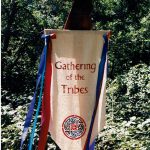 June 24-27, in Northern California, we will hold the Gathering of the Tribes. This will not be “just another Asatru gathering;” it will be the beginning of a new phase in our movement’s history. If you are an AFA member or sympathizer, we hope you’ll be here!

The core of the Gathering of the Tribes, as the name indicates, is tribalism. It is time to form organic groupings of our Folk, and we will begin that undertaking during these four days. I have put a lot of preparation into some ideas which I hope will excite and inspire you as we carve our path into the next century.

We’ll also address intentional communities as the core of these evolving tribes, and take a long look at the social, political, and religious environments in which Asatru will operate in the coming century.

Other items on the agenda include a very relevant talk by Dr. James Russell, author of THE GERMANIZATION OF EARLY MEDIEVAL CHRISTIANITY, a class on y2k preperation by the Back to Basics Guild, a presentation on the challenges of forming intentional community by an expert in the field, and a traditional weapons demonstration by the Warrior Guild.

We’ve long felt that the women of Asatru needed to take a higher profile – so our GYTHJUR or priestesses will be more visible as we honor the Mighty Powers. Womanly wisdom will also express itself in seithwork or runecasting. There will be a blessing of children, as well.

As if this wasn’t enough, the Western Regional Thing of the Asatru Alliance will meet during the course of the Gathering – making this event especially attractive to members of Alliance kindreds, and setting new precedents for inter-organizational cooperation in Asatru.

Those who attended the Gathering of the Tribes will remember it always, as the time when “business as usual” and “status quo Asatru” were burned up on the fire of passion of forward movement. You will want to be here!

Day of Remembrance For Eyvind Kinrifi 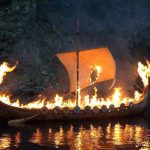