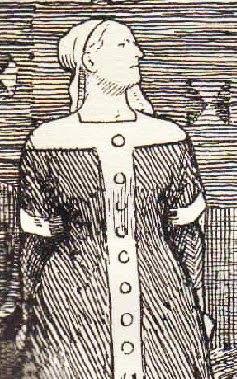 Though little information of Sigrid, Queen of Sweden, exists in a historical text, the stories abound. Born a Swedish noblewoman Sigrid married Erik the Victorious and together they had one son. She became the Regent after the king’s death, and it wasn’t long before her vast wealth drew out all of the suitors, one of whom was her own foster brother.

Tired of the constant suitors, and very aware of poor manners, it is said that Sigrid invited her foster brother and another suitor to a feast only to light the building on fire and lock them inside. This didn’t scare away the Christian Tyrant, Olaf Tryggvason. She might have entertained his proposal, but when he demanded that she convert to Christianity to wed him, Sigrid immediately turned him away. This enraged Tryggvason so much that he first insulted her age and beauty, and then slapped her. The story says she then told him that his behavior very well might lead to his death.

It was not long before Sigrid united Sweden with Denmark by marrying King Sweyn Forkbeard. Already feuding with Olaf, it didn’t take much for Sigrid to convince her new husband to go to war. This led to one of the largest ancient maritime battles, the Battle of Swold, in which Olaf Tryggvason was killed.

What can we learn from this story?

While we can’t run around burning to death the people that annoy us, we can take a stand for ourselves and our Folk. We have the right to defend ourselves and our dignity from those who would try to dimmish us. And when we all work together as a cohesive group so much can be done to defend and raise our Folk up.

It is never in our best interest to play it nice just for the sake of being polite. Honesty and hard truths are rarely looked at with fondness, but they are so important. Be honest, be truthful, defend and build your dignity. We are our deeds.