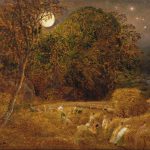 The Asatru Folk Assembly would like to wish all our folk a very special Winter Finding. May the chill in the air bring us closer to our friends, our families, and our Gods. 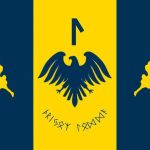 Today it is my pleasure to announce and welcome home The Three Rivers Kindred of California as an official kindred of the Asatru Folk Assembly. Gaining AFA affiliation is not an easy task. Kindreds must exemplify dedication, steadfastness and loyalty. It is beautiful to watch our community grow with a boldness that honors our Gods, Ancestors and Folk!
Please give a warm welcome and a mighty Hailsa to The Three Rivers Kindred! 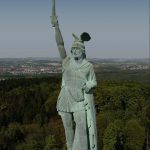 Today we honor Hermann of the Cherusci . He is one of our greatest heroes from the distant past (approximately 17 bce-19ce). There are a few reasons why we take the time to remember Hermann der Cherusker, whose name is derived from Old High German ‘heri’ and ‘man’ meaning “Man of War.” He was the son of Sigimer, a Prince of the German Nation. He had lived in Rome as a youth where he was held captive but would later be educated and trained as a Roman soldier. Eventually he obtained Roman citizenship as well as a high honor status. Upon this he would be assigned the task of infiltrating Germania in order for Rome to take control of the area. He would ultimately reunite with his true folk, rally up German tribes and keep the Romans from conquering the land for many many years. In this Germania would continue to thrive and keep their traditions and culture from radically changing from foreign influences.

This brief glimpse into the deeds of Hermann is important because the vast majority of us have been virtually held captive by the interests of others who are not sympathetic to our Folk or our traditional values. Most of us are educated and trained in ways that would seek to destroy what had originally shaped us and gave us noble purpose. But, however, if we are able to tap into our true ancestral ways we are more likely to save ourselves from self-destruction. By rallying our Folk together for common purposes we become stronger and better equipped to take on the forces that wish to confuse our efforts of survival, frith and prosperity. To remain estranged from our Folk at this point is to leave our orlog in the hands of those who would have us surrender and deny ourselves for the establishment of a fate that we may never recover from. To unite is our only option if we are to recover from the battles waged against us. When we each make the effort to reach out to our Folk and build connections, when we turn to our lore for direction and determination, when we succeed in deeds that will shape our future in ways that are harmonious to us instead of those who aim to crush us, we come closer and closer to achieving what Hermann achieved all of those years ago.

So on the Ninth of September and during this month, ponder the actions you could make in honor of this concept and turn it into a reality. What can you DO to help your folk unite? In what ways can you challenge yourself to perform deeds that make a difference? How can you give your Folk hope and purpose to continue to work for our noble cause day in and day out, month after month, year after year? If we all do our part nothing can stop us from achieving our goals. Asking these questions of ourselves and following through with the answers we conceive show others that they can do the same. Help new members to get the fire of our purpose spreading within. Help those in your area make a difference that reflects the passion of our virtuous path. Be an example to the Folk at large that we are here, we are able, we are succeeding and being what our ancestors dreamed we could be if only we realized our potential. Others are still being educated and trained to be soldiers against their own well-being. We have lots of work to do to shake them out of it and guide them home. Those that seek to scatter our efforts for their own glory need to know that each day more and more of our Folk our waking up from this nightmare placed before us. Even more so we need to fully embrace this ourselves. Everyday we are actively getting more involved with each other, finding better ways to become all that we can be and not looking back. We our looking forward towards the guiding star of our ancestors, of the blooming of our folk in miraculous ways and to the successes of all our endeavors combined. We’ve seen progress and we seek to see more. So when you meet with your kindred, you speak with your fellow Ásatrúar, you make your next goal, know that we’re all in this together and we by uniting and persevering we can make each and every one of our sacrifices and deeds worth every second that we put into them.

HAIL the Folk!
HAIL the Doers!
HAIL the Memory of Hermann
and the Glory Ahead of Us! 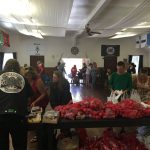 Yesterday we had yet another amazing food giveaway in Brownsville. We were able to distribute food to 126 families totaling 325 people. Thank you to all the amazing AFA volunteers. Thank you to the Viking Brotherhood for taking the lead. Thank you to the Yuba-Sutter Food Bank, Inc. for giving us the opportunity and food to help our community in this way. 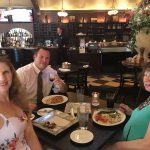 August marked the waning days of summer and the beginning of the harvest season.  It has been amazing to see the photos of all our AFA family around the world celebrating Freyfaxi.  The great God Frey was honored across the land and we began the first of the great harvest feasts of Asatru.  As Summer fades and Fall begins, it is a great time to take stock of what we have accomplished, for ourselves, for our Folk, and for our AFA family.  Now is a time to bring in all the wondrous accomplishments we have made in our own lives and our families.  Now is also time to share all that we have built, produced, and become with our larger AFA family.  The harvest feast is a custom as old as our Folk and something we celebrate and will celebrate for the next few months.  Let’s share the very best of ourselves with our AFA family, close to home and around the world!

September is set to be an amazing month for the AFA, we are all extremely excited for the 3rd annual Fall Fest in Minnesota.  Our folk will travel from across the country to celebrate and to worship with our AFA family.  Gothar Coordinator Blaine Qualls and Folkbuilder Jason Gallagher have created one of the greatest events in the AFA year.  Our Northern Plains Folk are one of, if not THE, most committed and active areas of AFA activity.  Mandy and I as well as the McNallens are beyond excited to celebrate with them this coming weekend.

If you would like to join us, there is still time to hop in the car and head to Minnesota!  If not, I would urge you to do everything in your power to make it to Winter Nights in the Poconos in October.  These events are how I fell in love with the AFA and how I met some of my very best friends.  Winter Nights specifically is where I met my lovely wife.  These gatherings of the Folk build bonds that transcend distance and last a life time.  We would love to see all out AFA family at these amazing upcoming events.