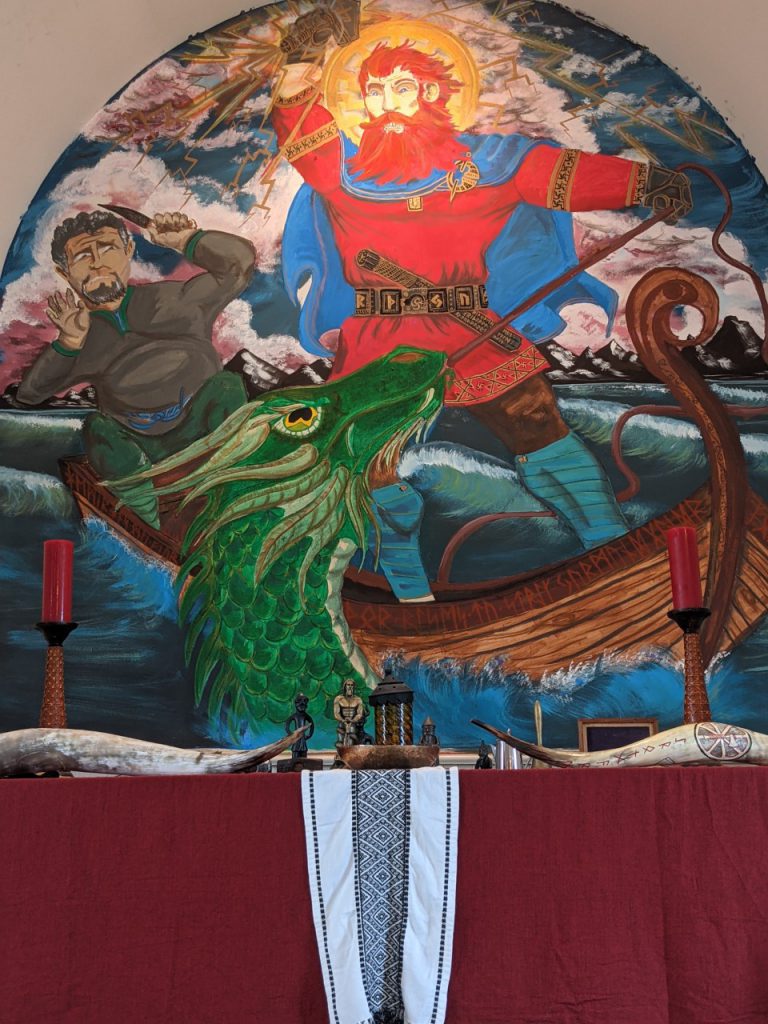 “Then said Gangleri: “What are the names of the other Æsir, or what is their office, or what deeds of renown have they done?” Hárr answered: “Thor is the foremost of them, he that is called Thor of the Æsir, or Öku-Thor; he is strongest of all the gods and men. He has his realm in the place called Thrúdvangar, and his hall is called Bilskirnir; in that hall are five hundred rooms and forty. That is the greatest house that men know of; It is thus said in Grímnismál:

Five hundred floors | and more than forty,
So reckon I Bilskirnir with bending ways;
Of those houses | that I know of hall-roofed,
My son’s I know the most.

Thor has two he-goats, that are called Tooth-Gnasher and Tooth-Gritter, and a chariot wherein he drives, and the he-goats draw the chariot; therefore is he called Öku-Thor. He has also three things of great price: one is the hammer Mjöllnir, which the Rime-Giants and the Hill-Giants know, when it is raised on high; and that is no wonder, it has bruised many a skull among their fathers or their kinsmen. He has a second costly thing, best of all: the girdle of might; and when he clasps it about him, then the godlike strength within him is increased by half. Yet a third thing he has, in which there is much virtue: his iron gloves; he cannot do without them when he uses his hammer-shaft. But no one is so wise that he can tell all his mighty works; yet I can tell thee so much tidings of him that the hours would be spent before all that I know were told.”
– Gylfagining

Asa Þórr is the great God of might and or courage that has served as an example to us from the beginning.  Þórr protects the Gods and Þórr protects us.  The example of protecting yours against giants inspires us all to stand tall and face those who would destroy or devour that which we hold dear.  Þórr is the exemplar of courage and the champion of champions.

Þórr laughs with his folk, he celebrates with us.  Þórr loves the worthy and the courageous and his eyes flash with rage at the coward and the worthless. In 2020 the Asatru Folk Assembly honored Asa Þórr with our second hof, Þórshof in Linden North Carolina.

May we worship the Thunderer with courage, may we gladden his heart.